Care Articles Jobs Waco, How Are We Doing? 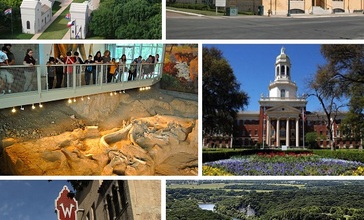 Share:
Care Articles Jobs Waco, How Are We Doing?

Waco ( WAY-koh) is a city which is the county seat of McLennan County, Texas, United States.

Local media
The major daily newspaper is the Waco Tribune-Herald. Other publications include The Waco Citizen, The Anchor News, The Baylor Lariat, Tiempo, Wacoan, and Waco Today Magazine.

Transportation
Interstate 35 is the major north-south highway for Waco. It directly connects the city with Dallas (I-35E), Fort Worth (I-35W), Austin, and San Antonio. Texas State Highway 6 runs northwest-southeast and connects Waco to Bryan/College Station and Houston. US Highway 84 is the major east-west thoroughfare in the area. It is also known as Waco Drive, Bellmead Drive (as it passes through the city of Bellmead), Woodway Drive or the George W. Bush Parkway. Loop 340 bypasses the city to the east and south. State Highway 31 splits off of US 84 just east of Waco and connects the city to Tyler, Longview, and Shreveport, Louisiana.

The Waco area is home to three airports. Waco Regional Airport (ACT) serves the city with daily flights to Dallas/Fort Worth International via American Eagle. TSTC Waco Airport (CNW) is the site of the former James Connally AFB and was the primary fly-in point for former President George W. Bush when he was visiting his ranch in Crawford. It is also a hub airport for L3 and several other aviation companies. McGregor Executive Airport (PWG) is a general-aviation facility located west of Waco.

Local transportation is provided by the Waco Transit System, which offers bus service Monday-Saturday to most of the city. Nearby passenger train service is offered via Amtrak. The Texas Eagle route includes daily stops in McGregor, located 20 miles west of the city.

Age Friendly Anonymous User
Age Friendly Anonymous User
Waco, TX
Waco
Despite the construction, Waco is age friendly because it tries to maintain a family oriented environment. From "Fixer Upper's" Silos to Cameron Park Zoo, to hosting outdoor events such as triathlons and 5ks/10ks/and some halves, there is something for all ages to participate in.
Upvote (0)
Downvote (0)

Sheila Merkledove
Sheila Merkledove
Waco, TX
Waco
Waco is a college town and the student here love to engage with our elderly and young people closer to their age. When I worked at the Nursing Homes here we always had the students to come out and mingled and they seem to love it. They came every other week to engage our Seniors.
Upvote (0)
Downvote (0)
Previous
1 2 3
Next
Previous
1 2 3
Next