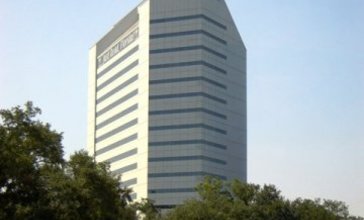 Turlington Education Building as seen from Tallahassee Civic Center by Urbantallahassee is licensed under CC BY-SA 3.0

Tallahassee is the capital of the U.S. state of Florida.

The population of the Tallahassee metropolitan area was 379,627 as of 2016. Tallahassee is the largest city in the Florida Panhandle region, and the main center for trade and agriculture in the Florida Big Bend and Southwest Georgia regions.

Tallahassee qualifies as a significant college town, with a student population exceeding 70,000. As the capital, Tallahassee is the site of the Florida State Capitol, Supreme Court of Florida, Florida Governor's Mansion, and nearly 30 state agency headquarters. The city is also known for its large number of law firms, lobbying organizations, trade associations and professional associations, including the Florida Bar and the Florida Chamber of Commerce.

It is a recognized regional center for scientific research, and home to the National High Magnetic Field Laboratory. In 2015, Tallahassee was awarded the All-American City Award by the National Civic League for the second time. Tallahassee is currently ranked as the 18th-best college town in the nation by Best College Reviews.

Tonya Hamilton
Tonya Hamilton
Tallahassee, FL
Tallahassee
I like the people here, the school are nice and the teachers are real nice about you checking on you student. I like living here don't have to travel so far to get to somewhere.
Upvote 0
Downvote 0