Care Articles Jobs Spring, How Are We Doing? 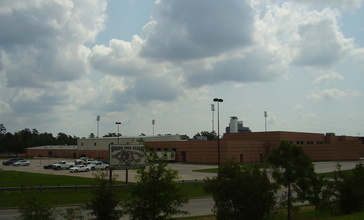 Spring High School by WhisperToMe is licensed under Public domain

Share:
Care Articles Jobs Spring, How Are We Doing?

Spring is a census-designated place (CDP) within the extraterritorial jurisdiction of Houston in Harris County, Texas, United States, part of the Houston–The Woodlands–Sugar Land metropolitan area.

The population was 54,298 at the 2010 census. While the name "Spring" is applied to a large area of northern Harris County and a smaller area of southern Montgomery County, the original town of Spring, now known as Old Town Spring, is located at the intersection of Spring-Cypress and Hardy roads and encompasses a relatively small area of perhaps 1 km2.

Climate
The climate in this area is characterized by hot, humid summers and generally mild to cool winters. According to the Köppen Climate Classification system, Spring has a humid subtropical climate, abbreviated "Cfa" on climate maps.

Economy
In January 2010 the Houston Business Journal reported that real estate officials said that ExxonMobil planned to build a corporate campus in unincorporated Harris County along Interstate 45, adjacent to the Spring CDP.[31] According to the article, ExxonMobil plans to consolidate thousands of employees from Houston and Fairfax County, Virginia into the facility; employees from over two dozen locations in Greater Houston are expected to be consolidated into the new facility. The 9,000-employee[32] campus opened in 2014.

Parks and recreation
Harris County Precinct 4 operates parks in the Spring CDP. Southwell Park, a 5-acre (2.0 ha) facility located at 27419 Nelson Street, includes the B.F. Clark Community Building, a picnic pavilion with tables and a barbecue pit, one lighted basketball pavilion, barbecue grills, toilets, and two playgrounds: one for children aged 2 through 5 and one for those aged 5 through 12. Bayer Park, a 30-acre (12 ha) facility at 24811 West Hardy Road, includes four lighted softball fields, seven lighted baseball fields, and toilets. Pundt Park is a 380-acre (150 ha) park at 4129 Spring Creek Drive that was being developed as of 2008.

PATRICIA MAY
PATRICIA MAY
Spring, TX
Spring
I love working with senior , I did with several clients with stroke , dementia, Alzheimer's, transportation to the Doctor app., for more than 10 years
Upvote 0
Downvote 0