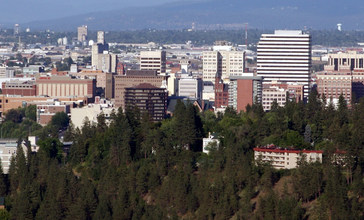 Downtown Spokane, Washington, as viewed from Palisades Park to the west of the city. by Mark Wagner (User:Carnildo) is licensed under CC BY 2.5

Share:
#2 of 2 Best Places to Retire in Washington
#46 of 60 Best Places to Retire in USA
Care Articles Jobs Spokane, How Are We Doing?
Spokane ( ( listen) spoh-KAN) is a city in the state of Washington in the northwestern United States. It is along the Spokane River west of the Rocky Mountain foothills in eastern Washington, 92 miles (148 km) south of the Canada–US border, approximately 20 miles (30 km) from the Washington–Idaho border, and 280 miles (450 km) east of Seattle along Interstate 90. Known as the birthplace of Father's Day, Spokane's official nickname is the "Lilac City". It is the seat of Spokane County and the economic and cultural center of the Spokane Metropolitan Area, the Greater Spokane Area, and the Inland Northwest. The city, along with the whole Inland Northwest, is served by Spokane International Airport, 5 miles (8 km) west of downtown Spokane. According to the 2010 Census, Spokane had a population of 208,916, making it the second largest city in Washington and the 102nd largest city in the United States. It's also the center of the third largest urban area in the Pacific Northwest (after Seattle and Portland). The first humans to live in the area, the Spokane people (their name meaning "children of the sun" in Salishan), arrived between 13,000 and 8,000 years ago, living off plentiful game. David Thompson explored the area with the westward expansion and establishment of the North West Company's Spokane House in 1810. This trading post was the first long-term European settlement in Washington. Completion of the Northern Pacific Railway in 1881 brought settlers to the Spokane area. The same year it was officially incorporated as a city with the name of "Spokane Falls", though it was commonly rendered without an 'e' as "Spokan Falls" for some time. In the late 19th century, gold and silver were discovered in the Inland Northwest. The local economy depended on mining, timber, and agriculture until the 1980s. Spokane hosted the first environmentally themed World's Fair at Expo '74. Many of the downtown area's older Romanesque Revival-style buildings were designed by architect Kirtland Kelsey Cutter after the Great Fire of 1889. The city also features Riverfront and Manito parks, the Smithsonian-affiliated Northwest Museum of Arts and Culture, the Davenport Hotel, and the Fox and Bing Crosby theaters. The Cathedral of Our Lady of Lourdes is the seat of the Roman Catholic Diocese of Spokane, and the city is also the center of the Mormon Spokane Washington Temple District. The Cathedral of St. John the Evangelist represents the Anglican community. Gonzaga University was established in 1887 by the Jesuits, and the private Presbyterian Whitworth University opened three years later in north Spokane. In sports, the Gonzaga Bulldogs collegiate basketball team competes at the Division I level. Professional and semi-professional sports teams include the Spokane Indians in Minor League Baseball and Spokane Chiefs in junior ice hockey. As of 2010, Spokane's only major daily newspaper, The Spokesman-Review, had a daily circulation of over 76,000.

Age Friendly Anonymous User
Age Friendly Anonymous User
Spokane, WA
Spokane
I feel that Spokane should have more availability for low income seniors to find affordable housing.. I've noticed a lot of the elderly are forced to live in unfavorable conditions with certain family members, because they cannot afford proper care. I believe they deserve to have more options available to them, so they can continue to live their lives with dignity and respect.
Upvote 0
Downvote 0

Anna Richardson
Anna Richardson
Spokane, WA
Spokane
There are a wide variety of different aged people and with that many opportunities for them. There are many different school districts within the Spokane area and lots of businesses for jobs of all kinds.
Upvote 0
Downvote 0

Learn more about taxes in Washington