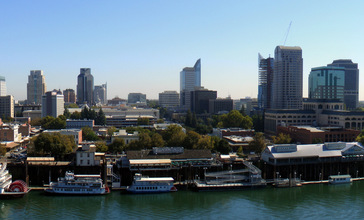 The Sacramento skyline, as seen from The Ziggurat in West Sacramento, California. The building is occupied by California Department of General Services who were very generous in their time in permitting me use their balcony. by J.smith is licensed under CC BY-SA 3.0

Share:
#1 of 3 Best Places to Retire in California
#19 of 56 Best Places to Retire in USA
Care Articles Jobs Sacramento, How Are We Doing?
Sacramento ( SAK-rə-MEN-toh; Spanish: [sakɾaˈmento]) is the capital city of the U.S. state of California and the seat of Sacramento County. It is at the confluence of the Sacramento River and the American River in the northern portion of California's expansive Central Valley, known as the Sacramento Valley. Its estimated 2016 population of 493,025 makes it the sixth-largest city in California, the fastest-growing big city in the state, and the 35th largest city in the United States. Sacramento is the cultural and economic core of the Sacramento metropolitan area, which includes seven counties with a 2010 population of 2,414,783. Its metropolitan area is the fourth largest in California after the Greater Los Angeles area, the San Francisco Bay Area, and the San Diego metropolitan area, and is the 27th largest in the United States. In 2002, the Civil Rights Project at Harvard University conducted for Time magazine named Sacramento "America's Most Diverse City". Sacramento became a city through the efforts of the Swiss immigrant John Sutter, Sr., his son John Augustus Sutter, Jr., and James W. Marshall. Sacramento grew quickly thanks to the protection of Sutter's Fort, which was established by Sutter. During the California Gold Rush, Sacramento was a major distribution point, a commercial and agricultural center, and a terminus for wagon trains, stagecoaches, riverboats, the telegraph, the Pony Express, and the First Transcontinental Railroad. The city was named after the Sacramento River, which forms its western border. The river was named by Spanish cavalry officer Gabriel Moraga for the Santísimo Sacramento (Blessed Sacrament), referring to the Catholic Eucharist. Today, the city is known for its diversity, tree canopy (largest in the U.S.), historic Old Sacramento, evolving contemporary culture as the most "hipster city" in California, sunny climate, state administration, and farm-to-fork dining. California State University, Sacramento, is the largest university in the city and a designated "Tree City USA" campus. The University of the Pacific is a private university with one of its three campuses, the McGeorge School of Law, in Sacramento. In addition, the University of California, Davis, 16 miles west of Sacramento, operates UC Davis Medical Center, a world-renowned research hospital, in the city of Sacramento.