Care Articles Jobs Ruston, How Are We Doing? 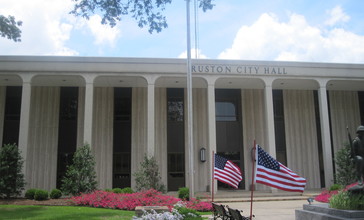 I took photo with Canon camera. by Billy Hathorn is licensed under CC BY-SA 3.0

Share:
Care Articles Jobs Ruston, How Are We Doing?

Ruston is a small city and the parish seat of Lincoln Parish, Louisiana, United States.

It is the largest city in the Eastern Ark-La-Tex region. As of the 2010 United States Census, the population was 21,859, reflecting an increase of 6.4 percent from the count of 20,546 counted in the 2000 Census. Ruston is near the eastern border of the Ark-La-Tex region and is the home of Louisiana Tech University. Its economy is therefore based on its college population. Ruston hosts the annual Peach Festival. Ruston is the principal city of the Ruston Micropolitan Statistical Area, which includes all of Lincoln parish.

Infrastructure
The 527th Engineer Battalion (Triple Alpha) ("Anything, Anytime, Anywhere") is headquartered in Ruston. This battalion is part of the 225th Engineer Brigade of the Louisiana National Guard.

Peach Festival
Each June, Ruston hosts its annual Peach Festival, sponsored by the Squire Creek Country Club. Until the 1940s, most area peach farming had been done on a small-scale family basis. In 1947, area peach growers organized the Louisiana Fruit Growers Association and held the first festival four years later on June 27–28, 1951. On that occasion, Justin Wilson, the popular south Louisiana chef and Cajun humorist entertained the audience at Howard Auditorium on the Louisiana Tech campus. Then State Senator Dudley J. LeBlanc of Abbeville in Vermilion Parish, the promoter of the patent medicine known as Hadacol, was invited to crown the first Peach Festival Queen, Ann Colvin of Bernice in Union Parish.
The festival sponsors races of 5K and 1M and a tennis tournament played on the Louisiana Tech courts.

Railroad Fest
Railroad Fest is an annual makers, music, and culture festival held in Downtown Ruston each April since 2017.[28] The Makers Fair is held at the Historic Ruston Fire Station, and live music is performed at the amphitheater at Railroad Park.

Claudia Davis
Claudia Davis
Ruston, LA
Ruston
Ruston Louisiana is a very age friendly town because of its diversity, many things to do for people up in age as well as younger people . There are taxis available if needed , and a wide variety of CNA's if needed.
Upvote 0
Downvote 0

Age Friendly Anonymous User
Age Friendly Anonymous User
Ruston, LA
Ruston
Ruston is a pretty, small town in North Louisiana. It has many positive aspects which make it child friendly. The crime rate is relatively low , so generally speaking, all, including children, can feel safe. There is some affordable housing, although I'm not certain about the cost of child care. There is a lovely wooded park with a lake, picnic area, and bike trails. Kids can also enjoy a trip to the zoo, which is just a short trip out of town. However, there isn't much offered in the way of museums or other cultural attractions.
Upvote 0
Downvote 0
Previous
1 2 3 4
Next
Previous
1 2 3 4
Next