Care Articles Jobs Richmond, How Are We Doing? 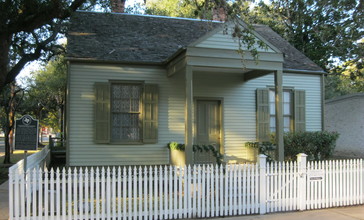 Photo shows the Long-Smith Cottage at 500 Houston Street in Richmond, Texas. The house was built c. 1837 on Jane Long's property. It is owned by the Fort Bend County Museum Association and is open to tours. by Djmaschek is licensed under CC BY-SA 3.0

Share:
Care Articles Jobs Richmond, How Are We Doing?

Richmond is a city in the U.S. state of Texas and the seat of Fort Bend County, within the Houston–The Woodlands–Sugar Land metropolitan area.

As of the 2010 U.S. census, the city population was 11,679. Even though it is the county seat, thus containing most of the local government offices, and the historic center of the area, it is actually one of the smaller cities in the area. Nearby Sugar Land is the largest city in the county.

Economy
The Texas Department of Criminal Justice operates the Jester State Prison Farm units, including the Jester I Unit, the Carol Vance Unit (formerly the Jester II Unit), the Jester III Unit, and the Jester IV Unit, in an unincorporated area 4 miles (6.4 km) east of Richmond.

Public libraries
Fort Bend County Libraries operates the George Memorial Library, the central library and the site of the administrative offices of the library system, located along Farm to Market Road 762. Richmond also has the Fort Bend County Law Library.

The Main Library moved from Rosenberg to its current location in Richmond in 1986. The George Foundation funded the 77,000 square feet (7,200 m2) library facility, designed by Ronald Wedemeyer Associates and built on 6 acres (2.4 ha) of land. When the library opened, it had unfinished areas to facilitate future expansion. In December 1989 the Commissioners Court of Fort Bend County, in accordance with Texas Local Government code §323.021(a), ordered the construction of a law library. The main library expansion and the 1991 installation of an automation system used funds from the 1989 bond election, and expansion occurred on 1995 and 2002. The 2002 expansion included the addition of two conference rooms.

Linda Rodgers
Linda Rodgers
Richmond, TX
Richmond
It has always been a friendly small lake town now growing at an average pace. It is warm, and welcoming to all ages becoming partly a retirement community. I have worked many jobs here not based on my age but my education, experience, background, and abilities.
Upvote 0
Downvote 0