Care Articles Jobs Petersburg, How Are We Doing? 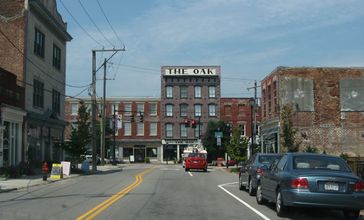 The Oak Antique Mall on North Sycamore Avenue, as seen from Bollingbrook Street in Downtown Petersburg, Virginia. by Ken Lund from Las Vegas, Nevada, USA is licensed under CC BY-SA 2.0

Share:
Care Articles Jobs Petersburg, How Are We Doing?
Petersburg is an independent city in the Commonwealth of Virginia in the United States. As of the 2010 census, the population was 32,420. The Bureau of Economic Analysis combines Petersburg (along with the city of Colonial Heights) with Dinwiddie County for statistical purposes. It is located on the Appomattox River and 21 miles (34 km) south of the state capital of Richmond. The city's unique industrial past and its location as a transportation hub combined to create wealth for Virginia and the region. Early in the colonial era, Petersburg was the final destination on the Upper Appomattox Canal Navigation System because of its location on the Appomattox River at the fall line (the head of navigation of rivers on the U.S. east coast) was a strategic place for transportation and commercial activities. It connected commerce as far inland as Farmville, Virginia, to shipping on the Chesapeake Bay and Atlantic Ocean. For similar reasons, Fort Henry was built at Petersburg to protect the river. As railroads were constructed in the state in the 1830s, Petersburg was developed as a major transfer point for both north-south and east-west competitors. The Petersburg Railroad was one of the earliest predecessors of the modern-day CSX Transportation system. Several of the earliest predecessors of the area's other major Class 1 railroad, Norfolk Southern, also met at Petersburg. Access to railroads stimulated industry in the city, which was already established because of the water power available at the fall line, as the river plunged from the Piedmont to lower lands. During the American Civil War, because of the railroad network, Petersburg was key to Union plans to capture the Confederate capital at Richmond. Nine months of trench warfare were conducted by Union forces during the 1864–65 Siege of Petersburg. Battlefield sites are located throughout the city and surrounding areas, partly preserved as Petersburg National Battlefield. The city is also significant for its role in African-American history. Petersburg had one of the oldest free black settlements in the state at Pocahontas Island. Two Baptist churches in the city, whose congregations were founded in the late 18th century, are among the oldest black congregations and churches in the United States. In the 20th century, these and other black churches were leaders in the national Civil Rights Movement. In the post-bellum period, a historically black college which later developed as Virginia State University was established nearby in Ettrick in Chesterfield County. Richard Bland College, now a junior college, was originally established here as a branch of Williamsburg's College of William and Mary. Petersburg remains a transportation hub, with the network of area highways including Interstate Highways 85, 95, and 295, and U.S. highways 1, 301, and 460. Both CSX and NS rail systems maintain transportation centers at Petersburg. Amtrak serves the city with daily Northeast Corridor trains to Norfolk, Virginia, and long-distance routes from states to the south. In the early 21st century, Petersburg leaders were highlighting the city's historical attractions for heritage tourism, and the industrial sites reachable by the transportation infrastructure. Military activity has been expanded by the federal government at nearby Fort Lee, home of the United States Army's Sustainment Center of Excellence, and the Army's Logistics Branch, Ordnance, Quartermaster, and Transportation Corps.

Emma Caballero
Emma Caballero
Petersburg, VA
Petersburg
Neighbors look out fo one another. For example, when our power went out for about 4 days some neighbors including myself took in some of the elders on my floor. And for those who wanted stay in their own homes my neighbors provided them with warm breakfast, lunch, and dinner. Also, giving out extra blankets, candles, matches, flash lights and hot chocolate.
Upvote 0
Downvote 0