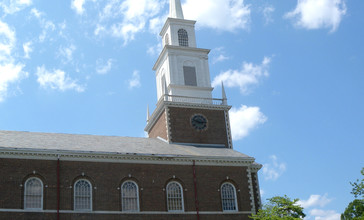 Looking northwest at First Church of Orange, Presbyterian (1719) on a mostly sunny midday. by Jim.henderson is licensed under Public domain

Share:
Care Articles Jobs Orange, How Are We Doing?
The City of Orange is a township in Essex County, New Jersey, United States. As of the 2010 United States Census, the township's population was 30,134, reflecting a decline of 2,734 (-8.3%) from the 32,868 counted in 2000, which had in turn increased by 2,943 (+9.8%) from the 29,925 counted in the 1990 Census.Orange was originally incorporated as a township by an act of the New Jersey Legislature on November 27, 1806, from portions of Newark Township. Portions of the township were taken on April 14, 1834, to form the now-defunct Clinton Township. On January 31, 1860, Orange was reincorporated as a town. Portions of the town were taken to form South Orange Township (April 1, 1861, now known as Maplewood), Fairmount (March 11, 1862, now part of West Orange), East Orange Township (March 4, 1863) and West Orange Township (April 10, 1863). On April 3, 1872, Orange was reincorporated as a city. In 1982, the city was one of four Essex County municipalities to pass a referendum to become a township, joining 11 municipalities that had already made the change, of what would ultimately be more than a dozen Essex County municipalities to reclassify themselves as townships in order take advantage of federal revenue sharing policies that allocated townships a greater share of government aid to municipalities on a per capita basis. The city derives its name from William III of England or William IV, Prince of Orange.Orange is often joined with neighboring East Orange, South Orange and West Orange and referred to as part of "the Oranges".