Care Articles Jobs Modesto, How Are We Doing? 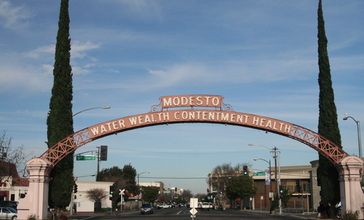 The Modesto Arch, first erected in 1912, by a level crossing in Modesto, north central California. The slogan is the city's motto: Water, wealth, contentment, health. by Unknown author is licensed under Public domain

Share:
Care Articles Jobs Modesto, How Are We Doing?
Modesto (Spanish for "modest"), officially the City of Modesto, is the county seat and largest city of Stanislaus County, California, United States. With a population of approximately 201,165 at the 2010 census, it is the 18th largest city in the state of California and forms part of the Modesto–Merced combined Statistical Area. The Modesto Census County Division, which includes the cities of Ceres and Riverbank, had a population of 312,842 as of 2010. Modesto is located in the Central Valley, 90 miles (140 km) north of Fresno, 40 miles (64 km) north of Merced, California, 92 miles (148 km) east of San Francisco, 68 miles (109 km) south of the state capital of Sacramento, 66 miles (106 km) west of Yosemite National Park, and 24 miles (39 km) south of Stockton. Modesto has been honored as a Tree City USA numerous times. It is surrounded by rich farmland; Stanislaus County ranks sixth among California counties in farm production. Led by milk, almonds, chickens, walnuts, and corn silage, the county grossed nearly $3.1 billion in agricultural production in 2011. The farm-to-table movement plays a central role in Modesto living as in the Central Valley. Filmmaker George Lucas, who was born in Modesto, graduated from Thomas Downey High School in 1962 and attended Modesto Junior College, immortalized the city in his award-winning 1973 film American Graffiti. Although it was not actually shot in Modesto, the film portrayed the spirit of cruising and friendship on Modesto's 10th and 11th Streets in 1962, and inspired a revival of interest in 1950s pop culture, including the TV show Happy Days and its spin-offs. The city's annual Architectural Festival honors Modesto's history as a testing ground for mid-century modern architecture during the 1940s and '50s. Modesto's mid-century buildings have been featured four times in Museum of Modern Art publications. The Gallup-Healthways Well-Being Index for 2011, which interviews 1,000 participants about their jobs, finances, physical health, emotional state of mind and communities, ranked Modesto 126 out of the 190 cities surveyed. In December 2009, Forbes ranked Modesto 48th out of 100 among "Best Bang-for-the-Buck Cities". In this ranking, Modesto ranked 8th in housing affordability and travel time but also ranked 86th in job forecast growth and 99th in foreclosures. Modesto is the home of Gallo Family Winery, the largest privately owned winery in the world.

Anita Sanchez
Anita Sanchez
Modesto, CA
Modesto
There are available transportation for seniors...taxis, ride shares, Lyft , Uber and Dial A Ride. There is a Senior Center for socialization. There are programs to help out seniors at home. I would like to see more outside businesses that offer health and exercises have programs for seniors. Silver Sneakers is offered but why does one need to be 65 years old? I'm 62 and would be interested.
Upvote 0
Downvote 0

Bimlesh Prasad
Bimlesh Prasad
Modesto, CA
Modesto
Modeto is age friendly because the community get together and do neighborhood meetings, help the needy and take care of each other and the city together,
Upvote 0
Downvote 0