Care Articles Jobs Mobile, How Are We Doing? 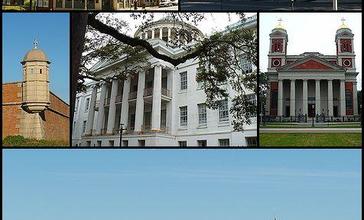 Share:
Care Articles Jobs Mobile, How Are We Doing?
Mobile ( moh-BEEL; French pronunciation: ​[mɔ.bil]) is the county seat of Mobile County, Alabama, United States. The population within the city limits was 195,111 as of the 2010 United States Census, making it the third most populous city in Alabama, the most populous in Mobile County, and the largest municipality on the Gulf Coast between New Orleans, Louisiana, and St. Petersburg, Florida. Alabama's only saltwater port, Mobile is located on the Mobile River at the head of the Mobile Bay and the north-central Gulf Coast. The Port of Mobile has always played a key role in the economic health of the city, beginning with the settlement as an important trading center between the French colonists and Native Americans, down to its current role as the 12th-largest port in the United States. Mobile is the principal municipality of the Mobile metropolitan area. This region of 412,992 residents is composed solely of Mobile County; it is the third-largest metropolitan statistical area in the state. Mobile is the largest city in the Mobile-Daphne−Fairhope CSA, with a total population of 604,726, the second largest in the state. As of 2011, the population within a 60-mile (100 km) radius of Mobile is 1,262,907. Mobile was established in 1702 by the French as the first capital of colonial La Louisiane (New France). During its first 100 years, Mobile was a colony of France, then Britain, and lastly Spain. Mobile first became a part of the United States of America in 1813, with the annexation by President James Madison of West Florida from Spain. In 1861, Alabama joined the Confederate States of America, which surrendered in 1865. Considered one of the Gulf Coast's cultural centers, Mobile has several art museums, a symphony orchestra, professional opera, professional ballet company, and a large concentration of historic architecture. Mobile is known for having the oldest organized Carnival or Mardi Gras celebrations in the United States. Its French Catholic colonial settlers celebrated this festival from the first decade of the 18th century. Beginning in 1830, Mobile was host to the first formally organized Carnival mystic society to celebrate with a parade in the United States. (In New Orleans such a group is called a krewe.)

How did Alabama earn the grade of B? We examined the state taxes based on how age friendly they are. Alabama has a state sales tax of 4.00%. Of particular interest is that Alabama does not have taxes on social security. There are no estate taxes. There are no taxes imposed on inheritance. Alabama has an effective property tax rate of 0.43%. Weighing these taxes and other taxes most likely to impact the aging population is how Alabama earned its state tax grade of B.

Learn more about taxes in Alabama