Care Articles Jobs Medfield, How Are We Doing? 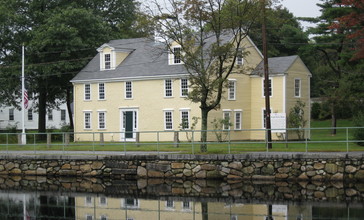 Share:
Care Articles Jobs Medfield, How Are We Doing?

Medfield is a town in Norfolk County, Massachusetts, United States.

The population is 12,024 according to the 2010 Census. It is an affluent community, about 17 miles southwest of Boston, Massachusetts, which is a 40-minute drive to Boston's financial district. Attractions include the Hinkley Pond and the Peak House.

Libraries
Medfield's Free Public Library began in 1873.[19] The public library is located on Main Street.[20] In the late 18th century some of the residents of Medfield and surrounding towns formed a subscription library, called the Medfield Social Library.

Medfield State Hospital
One of many abandoned buildings on the grounds of the former Medfield State Hospital.
Medfield State Hospital, located at 45 Hospital Road, opened in 1896 and originally operated on 685 acres (2.77 km2) of pasture. At its peak in 1952, it housed 1,500 patients. By 2001, it was down to about 300 acres (1.2 km2) and employed 450 people (including four psychologists) to care for a maximum of 147 patients. The cost to the Commonwealth of Massachusetts was $21.5 million. On April 3, 2003, the doors were closed. Although the buildings are not open to the public (they have been boarded up), the grounds may be visited during daylight hours.

Carole Cieri
Carole Cieri
Medfield, MA
Medfield
Our town has a beautiful Senior Center as well as the Council on Aging has a transportation bus.
Upvote 0
Downvote 0