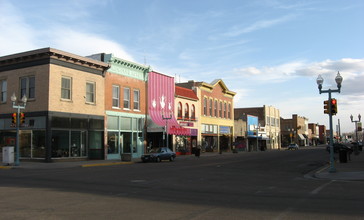 Southeastern corner of the intersection of Second Street and Ivinson Avenue in downtown Laramie, Wyoming, United States. This intersection is located in the heart of the Laramie Downtown Historic District, which is listed on the National Register of Historic Places. by Nyttend is licensed under Public domain

Share:
Care Articles Jobs Laramie, How Are We Doing?

Laramie is a city and the county seat of Albany County, Wyoming, United States.

The population was 30,816 at the 2010 census. Located on the Laramie River in southeastern Wyoming, the city is west of Cheyenne, at the junction of Interstate 80 and U.S. Route 287. Laramie was settled in the mid-19th century along the Union Pacific Railroad line, which crosses the Laramie River at Laramie. It is home to the University of Wyoming, Wyoming Technical Institute, and a branch of Laramie County Community College. Laramie Regional Airport serves Laramie.

The ruins of Fort Sanders, an army fort predating Laramie, lie just south of the city along Route 287. Located in the Laramie Valley between the Snowy Range and the Laramie Range, the city draws outdoor enthusiasts with its abundance of outdoor activities. In 2011, Laramie was named as one of the best cities in which to retire by Money Magazine, which cited its scenic location, low taxes, and educational opportunities.

Laramie is on a high plain between two mountain ranges, the Snowy Range, about 30 miles (48 km) to the west, and the Laramie Range, 7 miles (11 km) to the east. The city's elevation above sea level is about 7,165 feet (2,184 m). The Laramie River runs through Laramie toward its confluence with the North Platte River east of the Laramie Range.

SkyWest Airlines (United) provides daily commercial flights between Laramie Regional Airport and Denver, Colorado. The airport, 3 miles (5 km) west of the central business district, is operated and financed by the City of Laramie and Albany County. In addition to commercial flights, the airport serves private and corporate planes and atmospheric research aircraft from the University of Wyoming.

Laramie has multiple Taxi companies, as well as Uber service, which launched in 2017. The city is also served by Greyhound Lines, with service to and from Cheyenne and Fort Collins. Greenride of Northern Colorado provides service from Laramie to Fort Collins and Denver International Airport.

The city's drinking water comes from the Big Laramie River, the largest single source, and wellfields in the Casper Aquifer, and it is treated in a modern plant. The city's wastewater plant, which replaced an older plant, began operation in 1998. The Solid Waste Division operates the city-owned landfill, about 1 mile (1.6 km) north of the city. Laramie has 135 miles (217 km) of streets and 31 miles (50 km) of alleys.

Laramie, Wyoming began a county-wide initiative to join the AARP network of Age-Friendly communities in 2018, and is currently (July 2019) conducting its baseline assessment of age-friendliness/livability, with a report due in late September (2019). Preliminary results suggest that older people feel extremely safe in our city, but challenges with transportation remain. In general, the vast majority of survey respondents have reported feeling that Laramie is a good place to age in place. As our initiative continues, we will develop an action plan to address areas of concern that the data indicate. As a resident, and one of the leaders in our initiative, I would say that Laramie is “better than average” for older people, but (as is true of ALL communities) improvements are possible.

How did Wyoming earn the grade of A+? We examined the state taxes based on how age friendly they are. Wyoming has a state sales tax of 4.00%. Of particular interest is that Wyoming does not have taxes on social security. There are no estate taxes. There are no taxes imposed on inheritance. Wyoming has an effective property tax rate of 0.61%. Weighing these taxes and other taxes most likely to impact the aging population is how Wyoming earned its state tax grade of A+.

Learn more about taxes in Wyoming