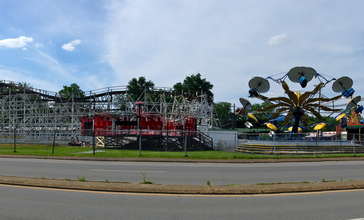 Panorama of Camden Park in Huntington, WV. by Wvfunnyman is licensed under CC BY-SA 3.0

Share:
Care Articles Jobs Huntington, How Are We Doing?
Huntington is a city in Cabell County and Wayne County in the U.S. state of West Virginia. It is the county seat of Cabell County, and largest city in the Huntington-Ashland, WV-KY-OH Metropolitan Statistical Area, sometimes referred to as the Tri-State Area. A historic and bustling city of commerce and heavy industry, Huntington has long-flourished due to its ideal location on the Ohio River at the mouth of the Guyandotte River. It is home to the Port of Huntington Tri-State, the second busiest inland port in the United States. Surrounded by extensive natural resources, the industrial sector is based in coal, oil, chemicals and steel all of which support Huntington's diversified economy. The city is a vital rail-to-river transfer point for the marine transportation industry. Also, it is considered a scenic locale in the western foothills of the Appalachian Mountains. This location was selected by Collis Potter Huntington as ideal for the western terminus of the Chesapeake and Ohio Railway, the predecessor of what would become CSX Transportation which still operates CSX Transportation-Huntington Division in the city to date. The railroad founded Huntington as one of the nation's first planned communities to facilitate the railroad and other transportation-related industries at the railway's western terminus. Developing fast after the railroad's completion in 1871, the site was previously a collection of agricultural homesteads, and is eponymously named for the railroad company's founder Collis Potter Huntington. The first identifiable permanent settlement, Holderby's Landing, was founded in 1775 in the Colony of Virginia. With the exception of the neighborhoods of Westmoreland and Spring Valley, most of the city is in Cabell County. As of the 2010 census, the metropolitan area is the largest in West Virginia. It spans 7 counties across 3 states, with a population of 365,419. Huntington is the second largest city in West Virginia, with a population of 49,138 at the 2010 census. The Huntington–Charleston TV market is the 64th-largest in the nation. The city is the home of Marshall University as well as the Huntington Museum of Art; the Big Sandy Superstore Arena; the U.S. Army Corps of Engineers (Huntington District); the Collis P. Huntington Historical Society and Railroad Museum; Camden Park, one of the world's oldest amusement parks; the headquarters of the CSX Transportation-Huntington Division, the largest division in the CSX network; the Special Metals Plant; and the Port of Huntington Tri-State, the largest river port in the United States. The largest employers are Marshall University, Cabell Huntington Hospital, St. Mary's Medical Center, CSX Transportation, the U.S. Army Corps of Engineers, Amazon, DirecTV, and the City of Huntington. The 2006 Warner Bros. motion picture We Are Marshall, the 2010 ABC series Jamie Oliver's Food Revolution, the 2017 television series My Brother, My Brother, and Me, and the Netflix documentary "Heroin(e)" were all filmed in the city.

There are no reviews for Huntington yet.