Care Articles Jobs Fall River, How Are We Doing? 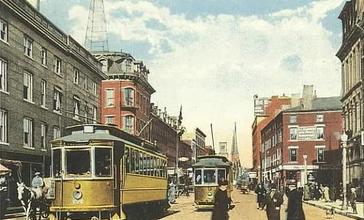 North Main Street, Fall River, MA; from a c. 1910 postcard. Most of the buildings pictured along the left side of the street, along with the city hall which can be barely seen to the far right, were demolished to make room for either Interstate 195 (which passes directly under the site of the gray Granite Block building) or a new home for Durfee Trust Bank (now a regional office for Bank of America). In fact, the white building just above the second trolley is the first building of that line that still stands. by Unknown author is licensed under Public domain

Share:
Care Articles Jobs Fall River, How Are We Doing?

The City of Fall River's population was 87,103 at the 2010 census, making it the tenth-largest city in the state. Located along the eastern shore of Mount Hope Bay at the mouth of the Taunton River, the city became famous during the 19th century as the leading textile manufacturing center in the United States.

While the textile industry has long since moved on, its impact on the city's culture and landscape remains to this day. Fall River's official motto is "We'll Try," dating back to the aftermath of the Great Fire of 1843. It is also nicknamed "the Scholarship City" because Dr. Irving Fradkin founded Dollars for Scholars here in 1958. In 2017, Mayor Correia introduced the "Make It Here" slogan as part of a citywide rebranding effort.Fall River is known for the Lizzie Borden case, Portuguese culture, its numerous 19th-century textile mills and Battleship Cove, the world's largest collection of World War II naval vessels and the home of the USS Massachusetts (BB-59).

Fall River is also the only city in the United States to have its city hall located over an interstate highway.