Care Articles Jobs Davenport, How Are We Doing? 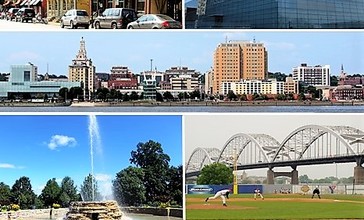 A montage of pictures of the city of Davenport, Iowa. by Farragutful is licensed under CC BY-SA 3.0

Share:
Care Articles Jobs Davenport, How Are We Doing?
Davenport is the county seat of Scott County in Iowa and is located along the Mississippi River on the eastern border of the state. It is the largest of the Quad Cities, a metropolitan area with a population estimate of 382,630 and a CSA population of 474,226; it is the 90th largest CSA in the nation. Davenport was founded on May 14, 1836 by Antoine Le Claire and was named for his friend George Davenport, a former English sailor who served in the U.S. Army during the War of 1812, served as a supplier Fort Armstrong, worked as a fur trader with the American Fur Company, and was appointed a quartermaster with the rank of colonel during the Black Hawk War. According to the 2010 census, the city had a population of 99,685 (making it Iowa's third-largest city). The city appealed this figure, arguing that the Census Bureau missed a section of residents, and that its total population was more than 100,000. The Census Bureau estimated Davenport's 2011 population to be 100,802. Located approximately halfway between Chicago and Des Moines, Davenport is on the border of Iowa across the river from Illinois. The city is prone to frequent flooding due to its location on the Mississippi River. There are two main universities: Saint Ambrose University and Palmer College of Chiropractic, where the first chiropractic adjustment took place. Several annual music festivals take place in Davenport, including the Mississippi Valley Blues Festival, the Mississippi Valley Fair, and the Bix Beiderbecke Memorial Jazz Festival. An internationally known 7-mile (11 km) foot race, called the Bix 7, is run during the festival. The city has a Class A minor-league baseball team, the Quad Cities River Bandits. Davenport has 50 plus parks and facilities, as well as more than 20 miles (32 km) of recreational paths for biking or walking. Three interstates, 80, 74 and 280, and two major United States Highways serve the city. Davenport has seen steady population growth since its incorporation. National economic difficulties in the 1980s, resulted in job and population losses. The Quad Cities was ranked as the most affordable metropolitan area in 2010 by Forbes magazine. In 2007, Davenport, along with neighboring Rock Island, won the City Livability Award in the small-city category from the U.S. Conference of Mayors. In 2012, Davenport, and the Quad Cities Metropolitan Area, was ranked among the fastest-growing areas in the nation in the growth of high-tech jobs. Notable natives of the city have included jazz legend Bix Beiderbecke, Pulitzer Prize-winning playwright Susan Glaspell, former National Football League running back Roger Craig, and former WWE World Heavyweight Championship holder Seth Rollins

Shawnna Owen
Shawnna Owen
Davenport, Davenport, IA
Davenport
The community i live in has a wide variety of ages but mostly seniors. Everyone really seems to get along and helps each other out.
Upvote 0
Downvote 0

How did Iowa earn the grade of C? We examined the state taxes based on how age friendly they are. Iowa has a state sales tax of 6.00%. Of particular interest is that Iowa does not have taxes on social security. There are no estate taxes. There are taxes imposed on inheritance. Iowa has an effective property tax rate of 1.50%. Weighing these taxes and other taxes most likely to impact the aging population is how Iowa earned its state tax grade of C.

Learn more about taxes in Iowa