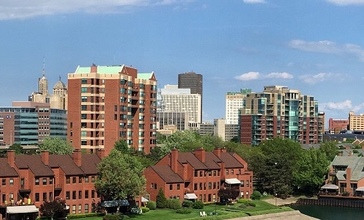 Skyline of Buffalo NY by Unknown author is licensed under CC BY-SA 4.0

Buffalo is the second largest city in the state of New York and the 81st-most populous city in the United States.

The city is also a major gateway for commerce and travel for the Canada–United States border, forming part of the bi-national Buffalo Niagara Region. The Buffalo area was inhabited before the 17th century by the Native American Iroquois tribe and later by French settlers. The city grew significantly in the 19th and 20th centuries as a result of immigration, the construction of the Erie Canal, the construction of rail transportation, and its close proximity to Lake Erie.

While some manufacturing activity remains, Buffalo's economy has transitioned to service industries with a greater emphasis on healthcare, research and higher education, which emerged following the Great Recession. Buffalo is located on the eastern shore of Lake Erie, at the head of the Niagara River, and 16 miles south of Niagara Falls.

Buffalo is recognized for its early embrace of electric power, owing to the nickname "the City of Light." The city is also famous for its urban planning and layout by Joseph Ellicott, an extensive system of parks designed by Frederick Law Olmsted, as well as significant architectural works spanning multiple centuries. It is a cultural center blending Northeastern and Midwestern United States traditions, with dozens of prominent annual festivals (including Taste of Buffalo and Allentown Art Festival), two professional sports teams (Buffalo Bills and Buffalo Sabres), and a long-standing music and arts scene.