Care Articles Jobs Bluefield, How Are We Doing? 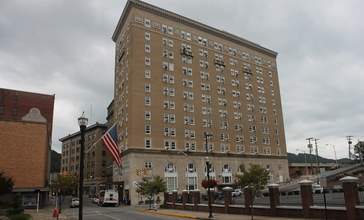 Photo of the West Virginian Hotel in downtown Blufield, West Virginia. by MarkMcCain is licensed under CC BY-SA 4.0

Share:
Care Articles Jobs Bluefield, How Are We Doing?

Transportation
Rail
The last passenger train was the Catlettsburg, Kentucky to Washington and Boston Hilltopper train of Amtrak, which was terminated in sweeping cuts in 1979.

Until 1977 Amtrak's Mountaineer operated from Chicago and Cincinnatil, through Bluefield, and then through lower Virginia to Norfolk, Virginia. Into the 1960s the Norfolk and Western Railroad operated trains from the Mid-West to the metropolitan Norfolk-Newport News, Virginia area, and Bluefield City was a stop.

Ida Sheets
Ida Sheets
Bluefield, WV
Bluefield
Alot of people here will speak to u when u speak to them
Upvote 0
Downvote 0

patricia kennedy
patricia kennedy
Bluefield, WV
Bluefield
Mostly elderly live here. We all pull together when someone is sick and/or if they just need someone to talk too. A natural disaster, a few years ago , brung us all together.We all are a neighborhood watch team. We all believe in Jesus and know He is the One that protects us from harm and danger.
Upvote 0
Downvote 0