Care Articles Jobs Albany, How Are We Doing? 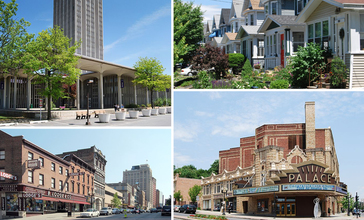 Share:
Care Articles Jobs Albany, How Are We Doing?

Albany ( ( listen) AWL-bə-nee) is the capital of the U.S. state of New York and the seat of Albany County. Roughly 150 miles (240 km) north of New York City, Albany developed on the west bank of the Hudson River, about 10 miles (16 km) south of its confluence with the Mohawk River. The population of the City of Albany was 97,856 according to the 2010 census. Albany constitutes the economic and cultural core of the Capital District of New York State, which comprises the Albany-Schenectady-Troy, NY Metropolitan Statistical Area, including the nearby cities and suburbs of Troy, Schenectady, and Saratoga Springs. With a 2013 Census-estimated population of 1.1 million the Capital District is the third-most populous metropolitan region in the state and 38th in the United States. Albany was the first European settlement in New York State. It was settled by Dutch colonists who in 1614, built Fort Nassau for fur trading and Fort Orange in 1624. They formed successful relations with both the Mahican and the Mohawk peoples, two major Native American nations in the region. The fur trade attracted settlers who founded a village called Beverwijck near Fort Orange. In 1664 the English took over the Dutch settlements, renaming the city as Albany, in honor of the then Duke of Albany, the future James II of England and James VII of Scotland. The city was officially chartered in 1686 under English rule. It became the capital of New York State in 1797, following the United States gaining independence in the American Revolutionary War. Albany is one of the oldest surviving settlements of the original British thirteen colonies, and the longest continuously chartered city in the United States. Its charter is possibly the longest-running instrument of municipal government in the Western Hemisphere. During the late 18th century and throughout most of the 19th, Albany was a center of trade and transportation. The city lies toward the north end of the navigable Hudson River, was the original eastern terminus of the Erie Canal connecting to the Great Lakes, and was home to some of the earliest railroad systems in the world. Albany's main exports at the time were beer, lumber, published works, and ironworks. Beginning in 1810, Albany was one of the ten most populous cities in the United States, a distinction it held until the 1860 census. Albany is one of the first cities in the world to have installed public water mains, sewer lines, natural gas lines and electricity, infrastructure and utilities that attracted and supported substantial new industry to the city and surrounding area during the 19th century. In the 20th century, the city opened one of the first commercial airports in the world, the precursor of today's Albany International Airport. During the 1920s a powerful political machine controlled by the Democratic Party arose in the state capital, connected to politics in New York City as well. It marshalled the power of immigrants and their descendants in both cities. The city's skyline changed in the 1960s and 1970s with the construction of office towers around the Empire State Plaza and at the uptown campus of SUNY Albany, mainly under the direction of Governor Nelson Rockefeller. While Albany experienced a decline in its population due to urban sprawl and suburbanization, many of its historic neighborhoods were saved from destruction through the policies of Mayor Erastus Corning 2nd, the longest-serving mayor of any city in the United States. In the early 21st century, Albany has experienced growth in the high-technology industry, with great strides in the nanotechnology sector. Albany has been a center of higher education for over a century, with much of the remainder of its economy dependent on state government and health care services. The city has rebounded from the urban decline of the 1970s and 1980s, with noticeable development taking place in the city's downtown and midtown neighborhoods. Albany is known for its rich history, commerce, culture, architecture, and institutions of higher education. Albany won the All-America City Award in both 1991 and 2009. Fortune 500 companies with offices in Albany include American Express, J.P. Morgan and Chase, Merrill Lynch, General Electric, Verizon, Goldman Sachs, International Paper, and Key Bank. In the 21st century, the Capital District has emerged as a major anchor of Tech Valley, the moniker describing the technologically-focused region of eastern New York State.

Age Friendly Anonymous User
Age Friendly Anonymous User
Albany, NY
Albany
In my surroundings I deal with babies 2-6 from 2:30 to 8 pm for several families and friends whom need my genuinely gracious heart to keep families in good standard while helping all the elders on my block also my mom is 69 but an able body but I oversee her diet and helps cook,clean and take them out weather premieres WELL KNOWN FOR MY PLACE TO BE THE PLACE FOR ELDERS AND BABIES SIMILAR NEIGHBOR
Upvote (0)
Downvote (0)