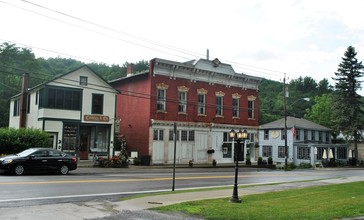 Share:
Care Articles Jobs Sharon Springs, How Are We Doing?
Sharon Springs is a village in Schoharie County, New York, United States. The population was 547 at the 2000 census. Its name derives from the hometown of the first Colonial settlers, Sharon, Connecticut, and the important springs in the village. Sharon Springs, Kansas likewise was settled by former residents of this Upstate New York village. The Village of Sharon Springs sits in the northwest part of the Town of Sharon, New York, approximately 50 miles (80 km) west of Albany, the state capital. Surrounded by rolling hills and nestled in a winding valley, the tidy village is near some of New York State's most popular attractions. Howe Caverns is 15 miles (24 km) to the south while The Mohawk River and Erie Canal are only 10 miles (16 km) to the north. The Adirondack Park is further north, about an hour away. Cooperstown, New York, home to the National Baseball Hall of Fame and Museum, The Farmer's Museum and The Fenimore Art Museum, is 22 miles (35 km) to the west and the Catskill Park is 50 miles (80 km) to the south. Sharon Springs, recognized by both the National Register of Historic Places as well as New York State's Register of Historic Places as a historic spa village, boasts some attractions of her own. Many of its historic spa-related structures were added to the National Register of Historic Places in 1994 as the Sharon Springs Historic District. At one time, mineral springs were used for medical treatments and in the summers wealthy families from New York City, including the Vanderbilts, would travel up to Sharon Springs for the spas. From 1836 to 1860, several large hotels were built in the village and many are still there today – though abandoned. In addition to the collection of fully and partially restored 19th century structures and ruins which can be accessed year-round, Sharon Springs also plays host to these seasonal events: the Garden Party festival in May, the Father's Day Tractor & Antique Power Show in June, a Fourth of July parade and celebration, the summer concert series every Wednesday night in July and August, the Sharon Springs Annual Antique Fair in August, the Harvest Festival in September, and the Victorian Festival in December. Since the middle-to-late 1980s, Sharon Springs has gained increased local attention and prominence in Schoharie County. As entrepreneurs from outside the region started businesses and restored its structures, regional and New York City media have tracked its progress. It then gained the attention of Korean spa investors with large, still unrealized plans. Businessmen and women continued to come to the village. As a result, Sharon Springs was recently featured on a cable reality television series, and provided a backdrop for a memoir. Although Sharon Springs, Inc. has begun work on the baths, and there is progress on renovating Clausen Farms, and the Roseboro Hotel.

There are no reviews for Sharon Springs yet.