Care Articles Jobs Sault Sainte Marie, How Are We Doing? 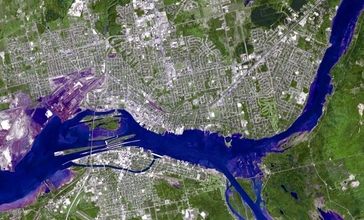 Share:
Care Articles Jobs Sault Sainte Marie, How Are We Doing?
Sault Ste. Marie is a city in, and the county seat of, Chippewa County in the U.S. state of Michigan. It is situated on the northeastern end of Michigan's Upper Peninsula, on the Canada–US border, and separated from its twin city of Sault Ste. Marie, Ontario, by the St. Marys River. The city is relatively isolated from other communities in Michigan and is 346 miles from Detroit. The population was 14,144 at the 2010 census, making it the second-most populous city in the Upper Peninsula. By contrast, the Canadian Sault Ste. Marie is much larger, with more than 75,000 residents, based on more extensive industry developed in the 20th century and an economy with closer connections to other communities. Sault Ste. Marie had been settled by Native Americans more than 12,000 years ago, and was long a crossroads of fishing and trading of tribes around the Great Lakes. It developed as the first European settlement in the region that became the Midwestern United States, as Father Jacques Marquette, a French Jesuit, learned of the Native American village and traveled there in 1668 to found a Catholic mission. French colonists later established a fur trading post, which attracted trappers and Native Americans on a seasonal basis. By the late 18th century, both Métis men and women became active in the trade and were considered among the elite in the community. A fur-trading settlement quickly grew at the crossroads that straddled the banks of the river. It was the center of a trading route of 3,000 miles (4,800 km) that extended from Montreal to the Sault, and from the Sault to the country north of Lake Superior. For more than 140 years, the settlement was a single community under French colonial and, later British colonial rule. Following the War of 1812, a US–UK Joint Boundary Commission finally fixed the border in 1817 between the Michigan Territory of the USA and the British Province of Upper Canada to follow the river in this area. Whereas traders had formerly moved freely through the whole area, the United States forbade Canadian traders from operating in the United States, which much reduced their trade and broke up the cohesion of the economy in the area. The American and Canadian communities of Sault Ste. Marie were each incorporated as independent municipalities toward the end of the nineteenth century. Sault Sainte-Marie in French means "the Rapids of Saint Mary". The Saint Mary's River runs from Lake Superior to Lake Huron; between what are now the twin border cities are located on either side. No hyphens are used in the English spelling, which is otherwise identical to the French, but the pronunciations differ. Anglophones say and Francophones say [so sɛ̃t maʁi]. In French, the name can be written Sault-Sainte-Marie. On both sides of the border, the towns and the general vicinity are called The Sault (usually pronounced ) or The Soo. The two cities are joined by the International Bridge, which connects Interstate 75 (I-75) in Sault Ste. Marie, Michigan, and Huron Street in Sault Ste. Marie, Ontario. Shipping traffic in the Great Lakes system bypasses the rapids via the American Soo Locks, the world's busiest canal in terms of tonnage passing through it. Smaller recreational and tour boats use the Canadian Sault Ste. Marie Canal. The city's downtown was developed on an island, with the locks to the north and the Sault Ste. Marie Power Canal to the south. The largest ships are 1,000 feet (300 m) long by 105 feet (32 m) wide. These are domestic carriers (called lakers). Too large to transit the Welland Canal that bypasses Niagara Falls, they are land-locked. Foreign ships (termed salties) are smaller and can exit the Great Lakes to the St. Lawrence River and the Atlantic Ocean. Sault Ste. Marie is the home of the International 500 Snowmobile Race (commonly called the I-500), which takes place annually and draws participants and spectators from all over the U.S. and Canada. The race, which was inspired by the Indianapolis 500, originated in 1969 and has been growing ever since.

There are no reviews for Sault Sainte Marie yet.

How did Michigan earn the grade of B? We examined the state taxes based on how age friendly they are. Michigan has a state sales tax of 6.00%. Of particular interest is that Michigan does not have taxes on social security. There are no estate taxes. There are no taxes imposed on inheritance. Michigan has an effective property tax rate of 1.71%. Weighing these taxes and other taxes most likely to impact the aging population is how Michigan earned its state tax grade of B.

Learn more about taxes in Michigan