Care Articles Jobs Hunt Valley, How Are We Doing? 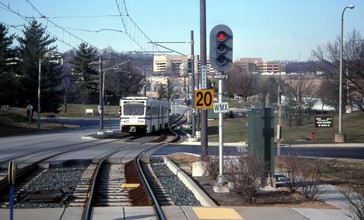 A southbound Baltimore Light Rail train enters Gilroy Road station in March 2000 by David Wilson is licensed under CC BY 2.0

Share:
Care Articles Jobs Hunt Valley, How Are We Doing?
Hunt Valley is an unincorporated community in Baltimore County, Maryland, United States. Its traditional name was based on being just east of Maryland's traditional Horse Country (like the Kentucky Blue Grass region), and the site of the venerable Maryland Hunt Cup championship of steeplechase horse racing and jumping established 1894. It lies just north of the city of Baltimore, along the York Road (former old historic Baltimore-York Turnpike) which is now Maryland Route 45 off Interstate 83. The Loch Raven Reservoir nearby is an important drinking water resource and with its surrounding forested watershed is one of three reservoirs (Loch Raven, Prettyboy and Liberty) established for the City of Baltimore and its surrounding metropolitan areas in Baltimore County since the 1880s and expanded in the 1910s. Located at a latitude of 39.5° North and longitude 76.7° West. Hunt Valley is the home of AmTote International, Inc., Systems Alliance, Inc., BreakAway Games, Atradius North America, Sinclair Broadcast Group, McCormick & Company, Textron Systems (formerly AAI Corporation), Dunbar (Armored Vehicles), TESSCO Technologies, and ZeniMax Online Studios. It was the former home of Noxell Corporation, makers of Noxzema, before Noxell was acquired by Procter & Gamble in the early 1990s. It was also the former home of KCI Technologies, Inc., PHH and Firaxis Games, all of which now reside in Sparks, Maryland which is a few miles to the north of Hunt Valley. MicroProse, a leading video game developer from the 1980s, was originally based in Hunt Valley. The Hunt Valley Inn is the most popular hotel in Maryland for annual regional Science fiction conventions for fans of the TV shows and feature movies Star Wars and the ever-popular Star Trek and their "Trekkers"/"Trekkies". Over the years it has hosted Balticon, ShoreLeave, Horrorfind, Monster Mania, Nostalgia Con, FaerieCon, ClipperCon and Farpoint. Hunt Valley is served by the old Cockeysville, Maryland post office, which is also a neighbor of the burgeoning Timonium suburban community, and also is home to a satellite campus of the Community College of Baltimore County in this northern central area of Baltimore County (which has three regular full-size campuses - Catonsville in the southwest, Dundalk in the southeast and Essex in the east). Nearby is the Timonium Race Course which although not as active as in decades past, still has a small amount of horse racing in conjunction with better known local tracks such as northwest Baltimore City's Pimlico Race Course (home of the annual Preakness Stakes, run since 1873 as one of throughbred horse racing's Triple Crown) and Laurel Park Racecourse in the northeastern suburbs of Washington, D.C.'s Prince George's County, Maryland. The Timonium Fairgrounds however are still home to the over century-and-a-half Maryland State Fair held in late August and early September. Development restrictions to the west of Hunt Valley and the Baltimore-Harrisburg Expressway (Interstate 83) and its parallel historic York Road (Maryland Route 45) were first envisioned in the late 1950s by famed American architect and urban planner David A. Wallace (1917-2004), who laid out the original concepts and plans for the Charles Center re-development of downtown Baltimore's central business district beginning in 1958 to the mid 1970s which later led also to the more famous Inner Harbor waterfront revitalization of the 1960s to the '80s. Along with colleague and partner Ian L. McHarg at the University of Pennsylvania's Graduate School of Fine Arts (later known as the University of Pennsylvania School of Design, after 2003, also known as PennDesign) envisioned the preservation of the Baltimore County valleys in their 1963 booklet A Plan for the Green Spring and Worthington Valleys.

There are no reviews for Hunt Valley yet.