Care Articles Jobs Fort Washington, How Are We Doing? 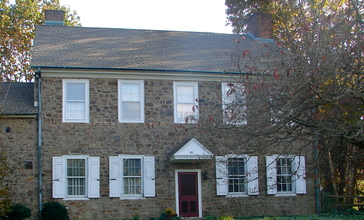 Quaker Manor House on the NRHP since November 21, 1976. Built 1730. Located at 1165 Pinetown Road (aka Commerce Road), Fort Washington, Montgomery County, Pennsylvania. Continental troops stayed here or used it as a hospital around the time of the Battle of Whitemarsh. by Smallbones is licensed under CC0

Share:
Care Articles Jobs Fort Washington, How Are We Doing?

Fort Washington is a census-designated place and suburb of Philadelphia in Montgomery County, Pennsylvania, United States. The population was 5,446 at the 2010 census.

History
Prior to the Revolutionary War The Fort Washington area was settled by many German immigrants. One such person was Philip Engard who immigrated in 1728. Engard purchased 100 acres (40 ha) on what was to be named Susquehanna Road and Fort Washington Avenue. By the mid-18th century the area came to be known as Engardtown, and Fort Washington Avenue was originally called Engardtown Road. The house built by Philip Engard is listed as the "Engard Family Home - 1765" in the Upper Dublin Township Open Space & Environmental Resource Protection Plan - 2005, as part of the Upper Dublin Historical Properties #25.

There are no reviews for Fort Washington yet.