Care Articles Jobs Corryton, How Are We Doing? 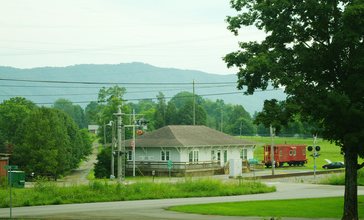 The Corryton Branch of the Knox County Public Library, in the Corryton community of Knox County, Tennessee, United States. The library stands at what was once the location of the Corryton Depot, and is built in a style that resembles an early 20th century train station. House Mountain rises in the distance. by Brian Stansberry is licensed under CC BY 3.0

Share:
Care Articles Jobs Corryton, How Are We Doing?
Corryton is an unincorporated community in northeastern Knox County, Tennessee, United States, about 15 miles northeast of Knoxville. The United States Geographic Names System classifies Corryton as a populated place. It is included in the Knoxville, TN Metropolitan Statistical Area. The Corryton Zip Code also encompasses the adjacent community of Gibbs (sometimes known as Harbisons Crossroads). Corryton is situated near two mountains, House Mountain (the highest point in Knox County) and Clinch Mountain. It includes a grade school, a public library, community center, and several churches including Little Flat Creek Baptist Church (founded in 1797, making it the first Baptist church organized in Knox County), Corryton Church (formerly Corryton Baptist) and Rutherford Memorial United Methodist. John Sawyers, a Revolutionary War veteran, settled in the vicinity of what is now Corryton in 1785. He subsequently built a small fort along the Emory Road. The community remained primarily agricultural until the construction of the Knoxville, Cumberland Gap and Louisville Railroad through the area in the late 1880s. The rail station that served the community was initially known as "Floyd." In 1887, an entrepreneur named Corryton Woodbury purchased the station and adjacent lands, and laid out lots in hopes of establishing a new town, which he named after himself. The lots failed to sell, however, and the venture was unsuccessful. Gibbs High School in Corryton has several famous alumni, including country musicians Kenny Chesney, Con Hunley, Phil Leadbetter, and Ashley Monroe. On April 25, 1983, Thomas Knauff set an FAI world record flying a glider on an out-and-return course of 1,646.68 km (1,023.20 mi), releasing from tow over Williamsport Regional Airport in Pennsylvania, flying south along the Ridge-and-valley Appalachians to take a turn-point photograph of the Little Flat Creek Church in Corryton, then returning for a landing after a 10-hour flight. The photographs were published in National Geographic magazine. This world record stood until 2003 when it was broken in Argentina, but still stands as a U.S. national record.