Care Articles Jobs Butte, How Are We Doing? 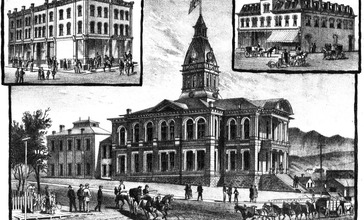 Share:
Care Articles Jobs Butte, How Are We Doing?
Butte is a town in, and the county seat of Silver Bow County, Montana, United States. In 1977, the city and county governments consolidated to form the sole entity of Butte-Silver Bow. The city covers 718 square miles (1,860 km2), and, according to the 2010 census, has a population of approximately 36,400, making it Montana's fifth largest city. It is served by Bert Mooney Airport with airport code BTM. Established in 1864 as a mining camp in the northern Rocky Mountains on the Continental Divide, Butte experienced rapid development in the late-nineteenth century, and was Montana's first major industrial city. By the turn of the twentieth century, it was the largest city between Chicago and San Francisco, though the population steadily declined with falling copper prices after World War I. In its heyday between the late-nineteenth and early-twentieth centuries, it was one of the largest and most notorious copper boomtowns in the American West, home to hundreds of saloons and a famous red-light district. Employment opportunities in the mines attracted surges of Asian and European immigrants, particularly the Irish; contemporarily, Butte has the largest population of Irish Americans per capita of any city in the United States. Butte was also the site of various historical events involving its mining industry and active labor unions and Socialist politics, the most famous of which was the labor riot of 1914. Despite the dominance of the Anaconda Copper Mining Company, Butte was never a company town, instead priding itself on architectural diversity and a civic ethos of rough-and-tumble individualism. Other major events in the city's history include the 1917 Speculator Mine disaster, the largest hard rock mining disaster in world history. Over the course of its history, Butte's mining and smelting operations generated an excess of $48 billion worth of ore, but also resulted in numerous environmental implications for the city: The upper Clark Fork River, with headwaters at Butte, is the largest Superfund site in the United States, and the city is also home to the Berkeley Pit. In the late-twentieth century, cleanup efforts from the EPA were instated, and the Butte Citizens Technical Environmental Committee was established in 1984. In the 21st century, efforts at interpreting and preserving Butte's heritage are addressing both the town's historical significance and the continuing importance of mining to its economy and culture. The city is home to Montana Tech, a public engineering and technical university affiliated with the University of Montana.

There are no reviews for Butte yet.

How did Montana earn the grade of C? We examined the state taxes based on how age friendly they are. Montana has a state sales tax of 0.00%. Of particular interest is that Montana does have taxes on social security. There are no estate taxes. There are no taxes imposed on inheritance. Montana has an effective property tax rate of 0.85%. Weighing these taxes and other taxes most likely to impact the aging population is how Montana earned its state tax grade of C.

Learn more about taxes in Montana