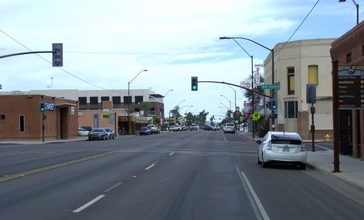 View of Historic Buckeye Downtown as seen from Monroe Ave. Buckeye is located in Maricopa County of Arizona. In 1910, Buckeye was platted for a Town. Buckeye was incorporated in 1929. by Marine 69-71 is licensed under CC BY-SA 4.0

Share:
Care Articles Jobs Buckeye, How Are We Doing?

Buckeye is a city in Maricopa County, Arizona and is the westernmost suburb in the Phoenix metropolitan area.

Transportation
Buckeye is served by five highways, a municipal airport and several nearby airports, and the railroad.

Rail
In 1910, the Arizona Eastern Railroad came to Buckeye; the first car in 1911; a steam rail line connected it to Phoenix by 1912; and a state highway by 1915. The coming of the railroad was so significant that the business district was moved to accommodate the location of the railroad station. As a result, Buckeye was booming. By 1912, major buildings were constructed, along with expansion of the business community. Union Pacific operates a rail line running east-west generally through the center of the city.

Air
The Buckeye Municipal Airport (ICAO identifier KBXK), is owned and operated by the city government.

Parks and recreation
The Buckeye Union High School A-Wing is listed on the National Register of Historic Places.
A popular recreation destination in Buckeye is the Buckeye Hills Recreation Area. It is located 7 miles (11 km) south of downtown Buckeye on State Route 85 (at mile marker 144). A 900-acre (3.6 km2) Buckeye Lake is planned. The City of Buckeye's Skyline Regional Park is an 8,700 acre mountain preserve located in the southern White Tank Mountains. The park features 8 miles of trails for hikers, mountain bikers and equestrians, picnic areas and camping. Entry to the park is free. By the end of September 2016, 9 additional miles of trails will be constructed for a total of 17 miles of trails.

carletta williams
carletta williams
Buckeye, AZ
Buckeye
the community is very involved, facebook, nextdoor, if it is news worthy someone knows about it. love this area
Upvote (0)
Downvote (0)