Care Articles Jobs Bartlesville, How Are We Doing? 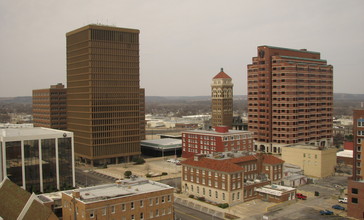 Downtown Bartlesville, Oklahoma. by Justin Cozart from Dallas, TX, USA is licensed under CC BY 2.0

Share:
Care Articles Jobs Bartlesville, How Are We Doing?

Bartlesville is a city mostly in Washington County in the U.S. state of Oklahoma.

Both companies have retained some operations in Bartlesville, but they have moved their corporate headquarters to Houston. It is one of two places in Oklahoma where a Lenape Native American tribe lives, the other being Anadarko.

Caney River
The Caney River flows through Bartlesville, separating the downtown area from the east side. The river flooded in October 1986 as a result of unusually heavy rainfall. The city was split in half for several days, and the flood caused considerable property damage. The river broke its banks again in June 2007, cresting five feet below the 1986 level.

How did Oklahoma earn the grade of C+? We examined the state taxes based on how age friendly they are. Oklahoma has a state sales tax of 4.50%. Of particular interest is that Oklahoma does not have taxes on social security. There are no estate taxes. There are no taxes imposed on inheritance. Oklahoma has an effective property tax rate of 0.89%. Weighing these taxes and other taxes most likely to impact the aging population is how Oklahoma earned its state tax grade of C+.

Learn more about taxes in Oklahoma