Care Articles Jobs Arch Cape, How Are We Doing? 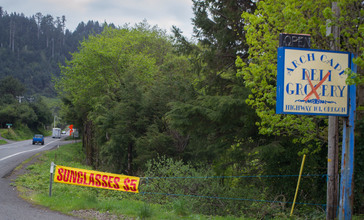 Looking south on the Oregon Coast Highway at Arch Cape by Visitor7 is licensed under CC BY-SA 3.0

Share:
Care Articles Jobs Arch Cape, How Are We Doing?

Arch Cape is an unincorporated community in Clatsop County, Oregon, United States. Named for the natural arch in the coastal rocks (Arch) and the headland that extends into the Pacific Ocean (Cape), it is located along the Pacific coast, approximately four miles south of Cannon Beach, between Hug Point State Recreation Site to the north and Oswald West State Park to the south. Castle Rock, a large castle-shaped monolith formed by lava flows millions of years ago, sits just off the coast of Arch Cape. According to "The Oregon Companion" by Richard H. Engeman, Arch Cape was a "remote hamlet...at the end of a wagon road from Seaside, Oregon." The 2000 US Census showed that Arch Cape had a population of 205. Prior to 1938, U.S. Route 101 in Oregon (Oregon Coast Highway), which was completed in 1936, ended at Arch Cape, just south of Arch Cape Creek. In February 1936, the Oregon State Highway Commission began work on a 1,228-foot tunnel through Neahkahnie Mountain. According to the July 1937 issue of Western Construction News, at the time, it was the longest tunnel on the Oregon highway system. Work was completed in March 1940. In 1939, just prior to the opening of the tunnel, Ernest White built a three-room home that later served as the Arch Cape post office and general store. In the 1960s, the building was expanded and converted into the Inn at Arch Cape, which remains today. Before U.S. Route 101 was built, the only way to reach Arch Cape from Cannon Beach was to venture around Hug Point, traveling along the beach at low tide. According to the January 8, 1910, edition of The Club Journal, "Only at low tide is it possible to get around this point in an automobile." According to the book "Images of Cannon Beach" by Deborah Coyle, the Arch Cape post office was established in 1891, with weekly mail delivery by foot or horseback until 1912, when train service began. In 2008, winter storms uncovered a rare "ghost forest" on the Arch Cape beach. Previously covered by deep sand, the giant tree stumps are estimated to be at least 4,000 years old. In September 2017, Arch Cape was recognized by the Oregon Water Resources Department for its water conservation program.

There are no reviews for Arch Cape yet.

How did Oregon earn the grade of C+? We examined the state taxes based on how age friendly they are. Oregon has a state sales tax of 0.00%. Of particular interest is that Oregon does not have taxes on social security. There are estate taxes. There are no taxes imposed on inheritance. Oregon has an effective property tax rate of 1.07%. Weighing these taxes and other taxes most likely to impact the aging population is how Oregon earned its state tax grade of C+.

Learn more about taxes in Oregon