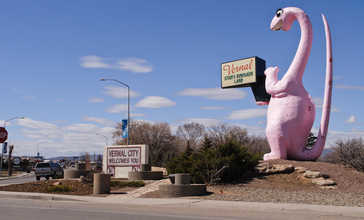 The pink sauropod greets visitors to Vernal, the main population center in northeastern Utah. This is indeed Utah's dinosaur country, because Dinosaur National Monument is only ten miles or so to the east, just north of the town of Jensen. It is also the only reason I decided to drive all the way out here. US-40 was the main east-west highway, also known as the Lincoln Highway, that stretched all the way from San Francisco to Atlantic City. Today, the sections west of Park City have been switched to I-80, but in this area, US-40 still plays an important role as it is still the only direct connection between Salt Lake City and Denver. (I-70 had been intended to supersede US-40 through Utah and Colorado, but I-70 ended up being re-oriented southwest to point toward Las Vegas and Los Angeles instead.) by InSapphoWeTrust from Los Angeles, California, USA is licensed under CC BY-SA 2.0

Share:
Care Articles Jobs Vernal, How Are We Doing?

Economy
Vernal's economy is based on extracting natural resources, including petroleum, natural gas, phosphate, and uintaite (more commonly known as Gilsonite). This has led to the establishment of branch offices of companies such as Halliburton and Schlumberger.
Tourism also plays a role in Vernal's economy due to the town's roots in the Old West and being a large site of ancient dinosaur fossils.[1] Vernal and the surrounding area are popular among outdoor enthusiasts as they are situated near plentiful spots for fishing, fly fishing, hunting, and other outdoor activities.

Vernal is age unfriendly especially if you are not Mormon. They are nice to you until they realize you are not leaving your church, St James Catholic Church is where I go. There is no transportation at all!! I hope I can continue to drive. No real specialists or doctors outside of the dr who just refills meds so insurance will pay them. None of the local docs go to conferences or seminars about new treatments. Hard to get fresh health food. Not a lot of senior programs except the Golden Age Center. My neighbor gets meals on wheels and they do a good job. The senior center is not welcoming to those of us who are not Mormon. I was treated so unkind I never went back. I do things with my church but it is hard to connect with folks.