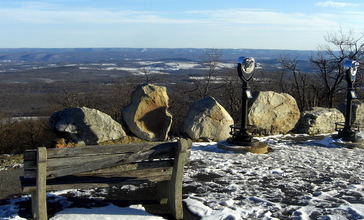 This is an image of a place or building that is listed on the National Register of Historic Places in the United States of America. Its reference number is by Jared Kofsky is licensed under CC BY-SA 3.0

Share:
Care Articles Jobs Montague, How Are We Doing?
Montague Township is a township in Sussex County, New Jersey, United States, in the New York City Metropolitan Area. As of the 2010 United States Census, the township's population was 3,847, reflecting an increase of 435 (+12.7%) from the 3,412 counted in the 2000 Census, which had in turn increased by 580 (+20.5%) from the 2,832 counted in the 1990 Census. High Point, within Montague Township, is the highest elevation within New Jersey at an altitude of 1,803 feet (550 m) above sea level. Montague is also the northernmost municipality in the state of New Jersey. Most of the area of Montague Township is public lands, primarily High Point State Park, Stokes State Forest, and Delaware Water Gap National Recreation Area. Montague is known for its scenery and wildlife, and summer sports in the area include hiking, biking, camping (both public and private campgrounds are available), and fishing. The derivation of the township's name is uncertain, though suggestions include that it was named after the George Montagu, 4th Duke of Manchester, as suggested by King George II, who approved the royal patent on March 26, 1759; for Lady Mary Wortley Montagu, an author who was popular at the time; or for solicitor John Montague. Montague was incorporated on February 21, 1798, by an act of the New Jersey Legislature as one of New Jersey's initial group of 104 townships.Before Montague Township was granted its own post office in the 1980s, residents had all of their mail delivered through the 12771 ZIP code for Port Jervis, New York, leading to situations where residents had New Jersey driver's licenses with a New York State mailing address.

There are no reviews for Montague yet.