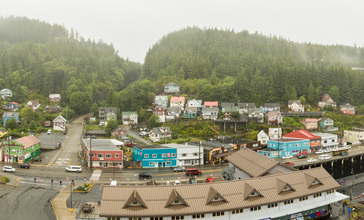 Share:
Care Articles Jobs Ketchikan, How Are We Doing?
Ketchikan ( KETCH-ih-kan; Tlingit: Kichx̱áan) is a city in the Ketchikan Gateway Borough, Alaska, United States, the southeasternmost city in Alaska. With a population at the 2010 census of 8,050, it is the fifth-most populous city in the state, and tenth-most populous community when census-designated places are included. The surrounding borough, encompassing suburbs both north and south of the city along the Tongass Highway (most of which are commonly regarded as a part of Ketchikan, albeit not a part of the city itself), plus small rural settlements accessible mostly by water, registered a population of 13,477 in that same census. Estimates put the 2014 population at 13,787 people. Incorporated on August 25, 1900, Ketchikan is the earliest extant incorporated city in Alaska, because consolidation or unification elsewhere in Alaska resulted in dissolution of those communities' city governments. Ketchikan is located on Revillagigedo Island, so named in 1793 by Captain George Vancouver. Ketchikan is named after Ketchikan Creek, which flows through the town, emptying into the Tongass Narrows a short distance southeast of its downtown. "Ketchikan" comes from the Tlingit name for the creek, Kitschk-hin, the meaning of which is unclear. It may mean "the river belonging to Kitschk"; other accounts claim it means "Thundering Wings of an Eagle". In modern Tlingit this name is rendered as Kichx̱áan. Ketchikan Creek served as a summer fish camp for Tlingit natives for untold years before the town was established by Mike Martin in 1885. The area near the mouth of Ketchikan Creek later earned Ketchikan a measure of infamy during the first half of the 20th century for a red-light district known as Creek Street, with brothels aligned on either side of the creek. According to the U.S. Postal Service, one of Ketchikan's two zip codes, 99950, is the highest-numbered in the United States. Ketchikan's economy is based upon government services, tourism and commercial fishing. Civic boosters have dubbed the community the "Salmon Capital of the World." The Misty Fiords National Monument is one of the area's major attractions, and the Tongass National Forest has long been headquartered in Ketchikan, mostly in the city's historic Federal Building. For most of the latter half of the 20th century, a large portion of Ketchikan's economy and life centered on the Ketchikan Pulp Company pulp mill in nearby Ward Cove. The mill closed in 1997 in the wake of the passage of the Tongass Timber Reform Act of 1990, which reduced timber harvest targets in the national forest. Ketchikan has the world's largest collection of standing totem poles, found throughout the city and at four major locations: Saxman Totem Park, Totem Bight State Park, Potlatch Park, and the Totem Heritage Center. Most of the totems at Saxman Totem Park and Totem Bight State Park are recarvings of older poles, a practice that began during the Roosevelt Administration through the Civilian Conservation Corps. The Totem Heritage Center displays preserved 19th-century poles rescued from abandoned village sites near Ketchikan.

There are no reviews for Ketchikan yet.

How did Alaska earn the grade of A? We examined the state taxes based on how age friendly they are. Alaska has a state sales tax of 0.00%. Of particular interest is that Alaska does not have taxes on social security. There are no estate taxes. There are no taxes imposed on inheritance. Alaska has an effective property tax rate of 1.19%. Weighing these taxes and other taxes most likely to impact the aging population is how Alaska earned its state tax grade of A.

Learn more about taxes in Alaska