Care Articles Jobs Jamaica, How Are We Doing? 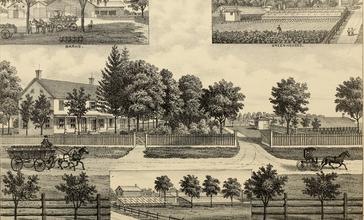 Identifier: historyofqueensc00newy (find matches)Title: History of Queens County, New York, with illustrations, portraits, & sketches of prominent families and individualsYear: 1882 (1880s)Authors: Subjects: Queens Co., N.Y Queens Co., N.YPublisher: New York W.W. MunsellContributing Library: Robarts - University of TorontoDigitizing Sponsor: University of TorontoView Book Page: Book ViewerAbout This Book: Catalog EntryView All Images: All Images From Book Click here to view book online to see this illustration in context in a browseable online version of this book.Text Appearing Before Image:andproduce various other plants, and two buildings for thepreservation of squashes, with a capacity for holding2,500 barrels. The apparatus for heating, watering, andattending all these establishments has beenmostly theinvention of Mr. Van Siclen. Ditmars Van Siclen,John B. Hopkins, John Selover, James Fredericks, andothers are also engaged in this branch of gardening, andthe markets in New York and Brooklyn are now sup-plied at all seasons with the vegetables that were form-erly procurable only in summer. Fanners Co-o(>erative Union.—In April 1870 a call waspublished for a meeting of the farmers of Jamaica at thehotel of James S. Remsen to take action in referenceto the unjust imposition of a tax upon farmers as pro-duce brokers. This call was signed by Abraham VanSiclen, John ODonnell, and eighteen others. At thismeeting a committee, of which John ODonnell was chair-man, was appointed to wait on the commissioner of inter-nal revenue at Washington, and endeavor to obtain a re- IText Appearing After Image:Farmers of Jamaica. ioi dress of the grievance. In this they were successful;and their success led to the organization of the Farm-ersCooperative Union of Jamaica, in May of the sameyear, with Samuel E. Vanderveer president, John ODon-nell and Abraham Van Sicklen vice-president.?, P. W.Remsen secretary, Ditmars Van Siclen treasurer, and82 members. By the action of this union several matters affectingthe interest of the farmers and gardeners of this townhave been accomplished, and the utility and practicabilityof farmers protective associations have been demon-strated. By the action of the union two robbers of a farmer inthe town, on the highway, were captured, convicted, and.punished; the Wallabout market in the city of Brooklynwas projected, and is now in the hands of a commission;the election of town officers in the interest of tax-payersand the removal of corrupt officials have been accom-plished; the remission of fines imposed on farmers andgardeners for selling produce in the strNote About Images Please note that these images are extracted from scanned page images that may have been digitally enhanced for readability - coloration and appearance of these illustrations may not perfectly resemble the original work. by Internet Archive Book Images is licensed under No restrictions

Share:
Care Articles Jobs Jamaica, How Are We Doing?
Jamaica is a middle-class neighborhood in the New York City borough of Queens. The neighborhood is part of Queens Community Board 12, which also includes Hollis, St. Albans, Springfield Gardens, Baisley Pond Park, Rochdale Village, and South Jamaica. The NYPD's 103rd, 113th & 105th Precincts patrol Jamaica. It was settled under Dutch rule in 1656 in New Netherland as Rustdorp. Under British rule, Jamaica became the center of the "Town of Jamaica". Jamaica was the county seat of Queens County from the formation of the county in 1683 until March 7, 1788, when the state government reorganized the town and the county seat moved to Mineola (now part of Nassau County). In 1814, Jamaica became the first incorporated village on Long Island. When Queens was incorporated into the City of Greater New York in 1898, both the Town of Jamaica and the Village of Jamaica were dissolved, but the neighborhood of Jamaica regained its role as county seat. Today, some locals group Jamaica's surrounding neighborhoods into an unofficial Greater Jamaica, roughly corresponding to the former Town of Jamaica, including Richmond Hill, Woodhaven, St. Albans, Rosedale, Springfield Gardens, Hollis, Laurelton, Cambria Heights, Queens Village, Howard Beach and Ozone Park. Jamaica is the location of several government buildings including Queens Civil Court, the civil branch of the Queens County Supreme Court, the Queens County Family Court and the Joseph P. Addabbo Federal Building, home to the Social Security Administration's Northeastern Program Service Center. The U.S. Food and Drug Administration's Northeast Regional Laboratory as well as the New York District Office are also located in Jamaica. Jamaica Center, the area around Jamaica Avenue and 165th Street, is a major commercial center, as well as the home of the Central Library of the Queens Borough Public Library. The New York Racing Association, based at Aqueduct Racetrack in South Ozone Park, lists its official address as Jamaica (Central Jamaica once housed NYRA's Jamaica Racetrack, now the massive Rochdale Village housing development). John F. Kennedy International Airport and the hotels nearby also use Jamaica as their address.

Michelle Holloway
Michelle Holloway
Jamaica, NY
Jamaica
It's a village with many elderly and disabled people. They put in ramps and electrical doors which aid in easy movement of walkers, wheelchairs and motorized chairs.
Upvote (0)
Downvote (0)

Batrou Dioubate
Batrou Dioubate
Jamaica, NY
Jamaica
This place is Age friendly because everyone respect one another and is friendly and will help you if you need help with something and nobody is rude or disrespectful with anyone.
Upvote (0)
Downvote (0)