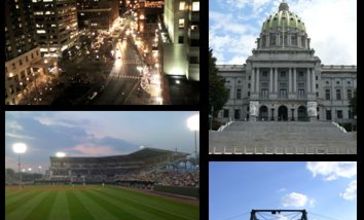 Share:
Care Articles Jobs Harrisburg, How Are We Doing?
Harrisburg (Pennsylvania German: Harrisbarrig) is the capital city of the Commonwealth of Pennsylvania in the United States, and the county seat of Dauphin County. With a population of 48,904, it is the ninth-largest city in the Commonwealth. It lies on the east bank of the Susquehanna River, 107 miles (172 km) west of Philadelphia. The Harrisburg-York-Lebanon, PA Combined Statistical Area is made up of six counties in south central Pennsylvania. As of the 2010 United States Census the CSA had a population total of 1,219,422, and ranked 3rd most populous in the state of Pennsylvania, after Philadelphia and Pittsburgh and 43rd most populous in the United States. Harrisburg played a notable role in American history during the Westward Migration, the American Civil War, and the Industrial Revolution. During part of the 19th century, the building of the Pennsylvania Canal and later the Pennsylvania Railroad allowed Harrisburg to become one of the most industrialized cities in the Northeastern United States. The U.S. Navy ship USS Harrisburg, which served from 1918 to 1919 at the end of World War I, was named in honor of the city. In the mid-to-late 20th century, the city's economic fortunes fluctuated with its major industries consisting of government, heavy manufacturing including the production of steel, agriculture (the greater Harrisburg area is at the heart of the fertile Pennsylvania Dutch Country), and food services (nearby Hershey is home of the chocolate maker, located just 10 miles (16 km) east of Harrisburg). The Pennsylvania Farm Show, the largest free indoor agriculture exposition in the United States, was first held in Harrisburg in 1917 and has been held there every early-to-mid January since then. Harrisburg also hosts an annual outdoor sports show, the largest of its kind in North America, an auto show, which features a large static display of new as well as classic cars and is renowned nationwide, and Motorama, a two-day event consisting of a car show, motocross racing, remote control car racing, and more. Harrisburg is also known for the Three Mile Island accident, which occurred on March 28, 1979, near Middletown. In 2010 Forbes rated Harrisburg as the second best place in the U.S. to raise a family. Despite the city's recent financial troubles, in 2010 The Daily Beast website ranked 20 metropolitan areas across the country as being recession-proof, and the Harrisburg region landed at No. 7. The financial stability of the region is in part due to the high concentration of state and federal government agencies. The finances of the city itself, however, were poorly managed, and its inability to repay its bond debt has created an ongoing fiscal crisis.