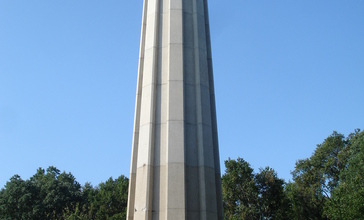 I took this photo of the Edison Tower myself in September 2011. by KForce at en.wikipedia is licensed under CC BY-SA 3.0

Share:
Care Articles Jobs Edison, How Are We Doing?
Edison is a township in Middlesex County, New Jersey, United States, in the New York City metropolitan area. Situated in north-central New Jersey, Edison lies along the Raritan Bayshore. As of the 2010 United States Census, Edison had a total population of 99,967, retaining its position as the fifth-most populous municipality in New Jersey. The 2010 population reflected an increase of 2,280 (+2.3%) from the 97,687 counted in the 2000 Census, which had in turn increased by 9,007 (+10.2%) from the 88,680 counted in 1990. Edison's population has been above the 100,000 threshold since 2010, increasing by 2.5% to a Census-estimated 102,450 in 2017.What is now Edison Township was originally incorporated as Raritan Township by an act of the New Jersey Legislature on March 17, 1870, from portions of both Piscataway Township and Woodbridge Township. Portions of the township were taken to form Metuchen on March 20, 1900, and Highland Park on March 15, 1905. The name was officially changed to Edison Township on November 10, 1954, in honor of inventor Thomas Edison, who had his main laboratory in the Menlo Park section of the township.Edison was ranked the 28th most-livable small city in the United States by CNN Money Magazine, and second in New Jersey in 2006 in Money Magazine's "Best Places To Live". In 2008, two years later, Money Magazine ranked the township 35th out of the top 100 places to live in the United States. In the 2006 survey of America's Safest Cities, the township was ranked 23rd, out of 371 cities included nationwide, in the 13th annual Morgan Quitno survey. In 2009, Edison was ranked as one of "America's 10 Best Places to Grow Up" by U.S. News & World Report. The rankings focused on low crime, strong schools, green spaces, and abundance of recreational activities.

There are no reviews for Edison yet.