Care Articles Jobs Big Sur, How Are We Doing? 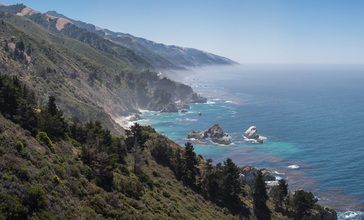 Central Californian coastline looking south, with the McWay Rocks (with arch) in the foreground, and McWay Cove in the center. by Diliff is licensed under CC BY-SA 3.0

Share:
Care Articles Jobs Big Sur, How Are We Doing?
Big Sur is a lightly populated, unincorporated region on California's Central Coast that is frequently praised for its rugged coastline and mountain views, where the Santa Lucia Mountains rise abruptly from the Pacific Ocean. The coast is the "longest and most scenic stretch of undeveloped coastline in the [contiguous] United States," it has been described as a "national treasure that demands extraordinary procedures to protect it from development" and "one of the most beautiful coastlines anywhere in the world, an isolated stretch of road, mythic in reputation." Big Sur's Cone Peak at 5,155 feet (1,571 m) is only 3 miles (5 km) from the ocean and the tallest coastal mountain in the contiguous United States. The stunning views make Big Sur a popular global tourist destination. It receives about the same number of visitors as Yosemite National Park which has led to ongoing, lengthy traffic backups and parking issues, especially during summer vacation periods and holiday weekends. The region does not have specific boundaries, but is generally considered to include the 71 miles (114 km) segment of California State Route 1 from Malpaso Creek near Carmel Highlands south to San Carpóforo Creek near San Simeon and the entire Santa Lucia range between the rivers. The interior region is uninhabited, while the coast remains relatively isolated and sparsely populated with about 1,000 year-round residents and relatively few visitor accommodations scattered among four small settlements. When the region was ceded by Mexico to the United States in 1848, it was the United States' "last frontier." The region remained one of the most isolated areas of California and the United States until, after 18 years of construction, the Carmel–San Simeon Highway (now signed as part of State Route 1) was completed in 1937. Along with the ocean views, the winding, narrow road, often cut into the face of seaside cliffs, dominates the visitor's experience of Big Sur. The highway has been closed more than 55 times by slides, and in May 2017, a 2 million cubic foot landslide blocked the highway at Mud Creek, north of Salmon Creek near the San Luis Obispo border, to just south of Gorda. The road is expected to be reopened in June 2018. The region is protected by the Big Sur Local Coastal Plan which preserves the region as "open space, a small residential community, and agricultural ranching." Approved in 1986, it is one of the most restrictive local use programs in the state, and is widely regarded as one of the most restrictive documents of its kind anywhere. The program protects viewsheds from the highway and many vantage points, and severely restricts the density of development. About 60% of the coastal region is owned by a government or private agency that does not allow any development. The majority of the interior region is part of the Los Padres National Forest, the Ventana Wilderness, Silver Peak Wilderness, or Fort Hunter Liggett. The original Spanish-language name for the unexplored mountainous terrain south of Monterey, the capital of Alta California, was "el país grande del sur" meaning, "the big country of the south." The name "Sud" ("south") was first used in the land grant Rancho El Sur made in 1834. In 1915 the English-speaking settlers formally adopted Big Sur as the name for their post office.

There are no reviews for Big Sur yet.