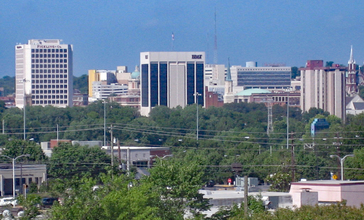 Share:
Care Articles Jobs Macon, How Are We Doing?

Macon is a city located in the state of Georgia, United States.

Macon lies near the geographic center of the state, approximately 85 miles (137 km) south of Atlanta, hence the city's nickname "The Heart of Georgia." Located near the fall line of the Ocmulgee River, Macon is the county seat of Bibb County and had a 2014 estimated population of 153,691.

Macon is the principal city of the Macon metropolitan area, which had an estimated population of 231,259 in 2014. Macon is also the largest city in the Macon–Warner Robins Combined Statistical Area (CSA), a larger trading area with an estimated 417,473 residents in 2014; the CSA abuts the Atlanta metropolitan area just to the north. In a 2012 referendum, voters approved the consolidation of Macon and Bibb County, and Macon became Georgia's fourth-largest city (just after Augusta).

The two governments officially merged on January 1, 2014. Macon is served by three interstate highways: I-16 (connecting the city to Savannah and coastal Georgia), I-75 (connecting the city with Atlanta to the north and Valdosta to the south), and I-475 (a city bypass highway). The city has several institutions of higher education, as well as numerous museums and tourism sites. The area is served by the Middle Georgia Regional Airport and the Herbert Smart Downtown Airport.

The mayor of Macon is Robert Reichert, a former Democratic member of the Georgia House of Representatives. Reichert was elected mayor of the newly consolidated city of Macon–Bibb, and he took office on January 1, 2014.

Randy Pang
Randy Pang
Macon, GA
Macon
Macon has a diverse population and a high number of elderly. There are numerous senior living central around the city and I know several people who live or have lived here. My church alone has a large population of seniors and many with senior life issues.
Upvote (0)
Downvote (0)